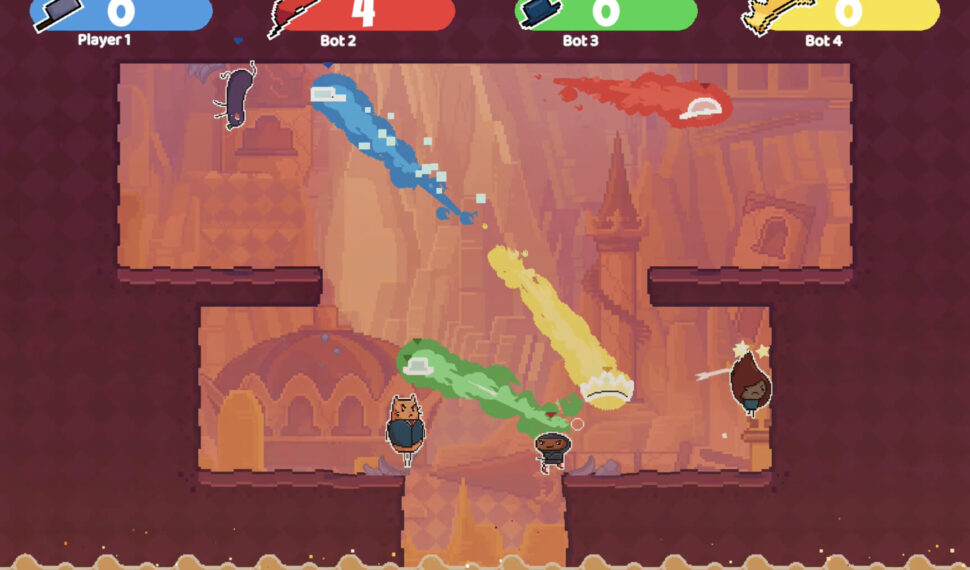 King of the Hat is 2-4 player 2D party platformer where you fight with a hat! Throw your hat to attack, defend and bait opponents. But watch out! If someone jumps on your hat… you die! In King of the Hat, your hat contains your soul. Crush your opponent’s hats (and souls) to assert your dominance over them. When you throw your hat, it goes on fire and becomes invulnerable. You can use it to beat the devil out of other players or to defend against your opponents’ flaming hats. Although the basic mechanics are easy to pick up and play, King of the Hat allows for deep, hat-tastic competitive play as a 2 player game. Change the rules, add power ups and play around level hazards to create the hat-based madness you’ve always dreamed of.

It’s an amazing casual game that is so easy to pickup. You just throw your hat to hattack and crush theirs to win, but if yours gets crush you lose. It’s that easy! Even recommended to those who are new to gaming or for young children. However, in its simplicity, it’s skill ceiling is high due to characters’ unique tool-sets and their techs, and how punishing and rewarding in top plays. If you’re fighting against a very competitive player, getting hit once is incredibly hard to recover and will result in losing that round. It even has ROLLBACK NETCODE. Making causal and competitive online games fun!